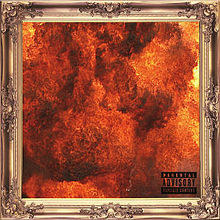 Indicud is the third studio album by American hip hop recording artist Kid Cudi. The album was released on April 16, 2013 under Wicked Awesome Records, GOOD Music and Republic Records. It was the first album of Cudi’s solo career to not be an installment of his Man on the Moon series. The album’s cover art was designed by Kid Cudi himself, who also served as an executive producer of Indicud.

The early release of Indicud was preceded by four singles – “Just What I Am” featuring King Chip, “King Wizard”, “Immortal and “Girls” featuring Too Short. Indicud debuted at #2 in the US with sales of 140,000 copies and debuted at number 32 on the UK Albums Chart, becoming Cudi’s highest-charting album on the chart, while entering at number 2 on the UK R&B Chart. The album received generally positive reviews from the majority of music critics upon its release.