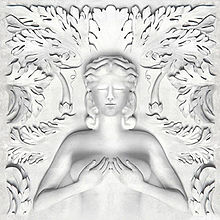 Cruel Summer is a compilation album by recording artists of American record label GOOD Music, released on September 14, 2012, by the label and Def Jam Recordings. American rapper Kanye West, head of the label, first revealed plans for a label collaborative album in October 2011. The album produced four singles—”Mercy”, “Cold”, “New God Flow”, and “Clique”—that charted on the US Billboard Hot 100.

Upon its release, Cruel Summer received generally lukewarm reviews from music critics, who commended its hubristic style and the tracks featuring West, but found it uneven as an album. It debuted at number two on the US Billboard 200, selling 205,000 copies in its first week. The album also reached the top 10 of charts in Australia, Canada, Switzerland, and the United Kingdom. As of November 4, 2012, Cruel Summer has sold 389,000 copies, according to Nielsen SoundScan.