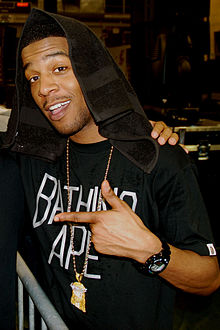 In 2009, Cudi’s debut single “Day ‘n’ Nite”, reached the top five of the Billboard charts. “Day ‘n’ Nite” was included on the mixtape as well as his debut studio album Man on the Moon: The End of Day (2009), which was certified Gold by the Recording Industry Association of America (RIAA). The End of Day also features the singles “Make Her Say” and “Pursuit of Happiness”. In 2010, he released his second studio album and the sequel to his first, Man on the Moon II: The Legend of Mr. Rager. The sequel was preceded by the release of two singles “Erase Me” and “Mr. Rager”, which were released to moderate success, with “Erase Me” peaking at #22 on the Billboard Hot 100. The album itself peaked at #3 on the Billboard 200, surpassing it’s predecessor in both sales and peak position. Very much like like his debut, The Legend of Mr. Rager also went on to be certified Gold by the RIAA. In April 2013, Cudi released his third studio album Indicud. The album, primarily produced by Cudi himself, peaked at #2 on the Billboard 200 chart, becoming Cudi’s highest-charting album on several charts as well as that one. The album spawned the singles “Just What I Am”, “Immortal” and “Girls”.

In 2009, Cudi teamed up with record producers Plain Pat and Emile Haynie to launch their Dream On imprint, in partnership with Universal Motown and Kanye West’s GOOD Music. In October 2010, Cudi announced that he was teaching himself how to play the guitar and that he would be forming a rock band, now known as WZRD, with his frequent collaborator and longtime friend Dot da Genius. In February 2011, Cudi announced the Dream On record label had been dissolved due to creative differences. Later in April 2011, while performing at New York City’s Roseland Ballroom, Cudi announced he was launching a label on his own, Wicked Awesome Records. WZRD ultimately released their eponymous debut album on February 28, 2012, under Wicked Awesome and Republic. The album debuted at #3 on the US Billboard 200 and at #1 on both the Top Rock Albums and Top Alternative Albums charts. In 2013, Cudi announced his departure from GOOD Music, to focus on Wicked Awesome Records; he left on good terms and is still heavily associated with the label, appearing on West’s sixth album Yeezus, later that year.

Kid Cudi has sold over 4.6 million digital singles and has worked with artists such as Kanye West, Jay-Z, Common, Mary J. Blige, David Guetta, Shakira, MGMT, Ratatat, Snoop Dogg and Michael Bolton. With his originality and creativity, as well as the emotion he conveys in his music, Cudi has amassed a large cult-like following among high school students, college students and stoners alike. In 2010, Cudi starred in the HBO series How to Make It in America, being credited as Scott Mescudi, until its cancellation in 2011. He has also starred in two short films Maniac (2011) and Cruel Summer (2012), directed by Shia LaBeouf and Kanye West respectively. Kid Cudi is set to appear in the upcoming 2014 Need for Speed film, and has made appearances on television shows such as One Tree Hill, The Cleveland Show and in the new Fox series Brooklyn Nine-Nine.